The primary goal of the Holiday Card Challenge and #cards2connect Programs is the collection and delivery of personalized, signed expressions of respect, caring, and gratitude to US Troops, Veterans, and Service Families. Your personalized and signed greeting cards and letters reflect your genuine support and caring, respect and appreciation of our military heroes, letting them know that they are not alone during the winter holiday season and now throughout the year.

Eighteen years ago, Dr. Laura Landerman-Garber handed out Holiday Cards to her Family at Thanksgiving, asking them to write messages to our Military Heroes; it was to be their “ticket to turkey”!

Flash forward to October 2017, when she became determined to send cards to a family friend aboard the USS Theodore Roosevelt and to each member of that Navy Aircraft Carrier, then deployed and out to sea.

After learning that there were 5,000 plus Military Personnel aboard, she created the Card Challenge and got word out through Social Media platforms, TV, newspaper, and hundreds of phone calls.

The response was spectacular and the cards poured in from Granite Staters, from preschoolers to Scouts to students to local VFW Chapters to NH Governor Sununu and from US Senators Shaheen and Hassan and Congresswomen Kuster and Shea-Porter.

Her goal was 5,000 but the final count was 17,000 cards for our Troops! The cards were boxed up and sent out and arrived to the Ship the weekend before Christmas/Hanukah/Kwanza.

Laura promised a WWII Veteran that if she continued the Card Challenge in 2018, that she would send cards to all five Branches of our Military.
A promise is a promise and in the Spring of 2018, she formed a Nonprofit Corporation, Holiday Cards 4 Our Military-NH Challenge, to both spread the word across State Lines and to allow for tax-exempt donations as the postage costs were hefty. 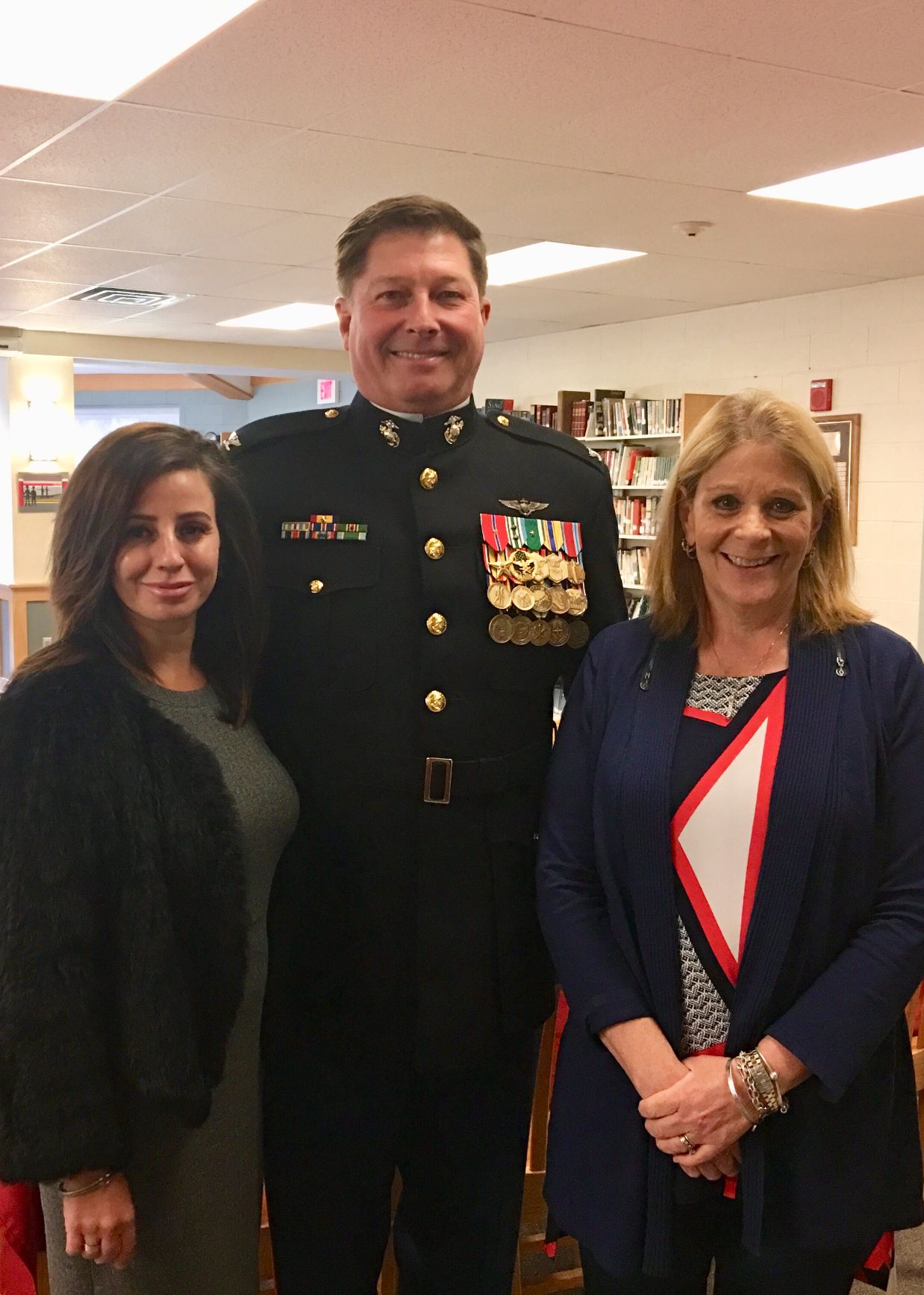 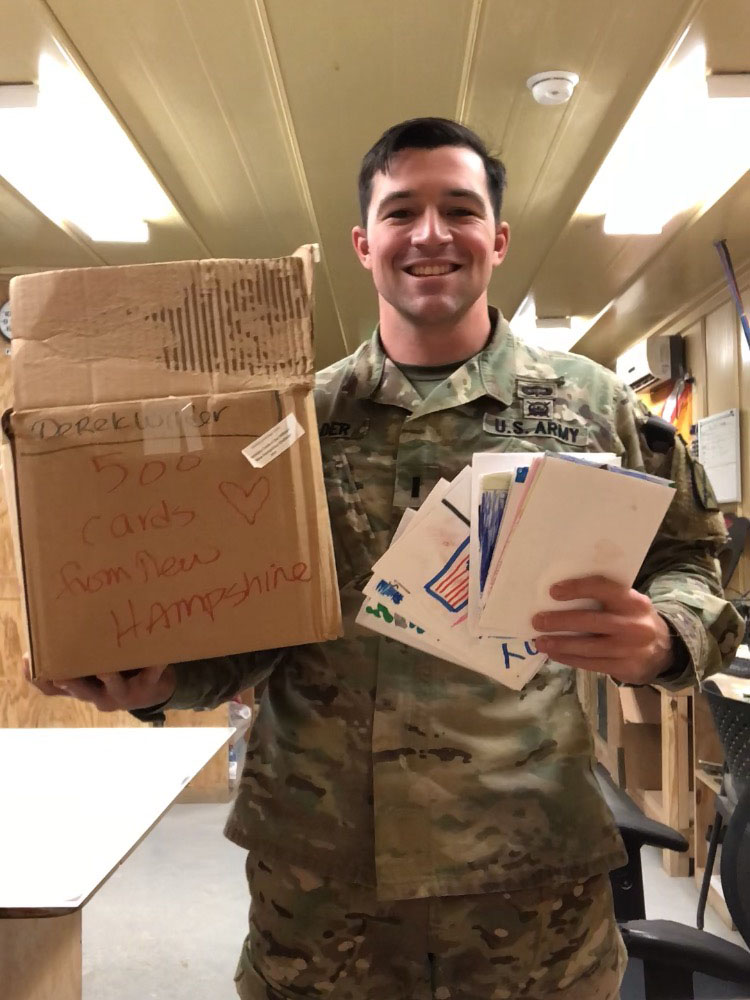 Laura went to DC and met with Senators Shaheen and Hassan, Congressman Pappas, Congresswoman Kuster, and with members from each of the Military Branches, brainstorming on how to achieve her goals.

She met in NH with Governor Sununu as well as NH Commissioner of Education, Frank Edleblut. The Department of Education created a YouTube Video, challenging every Student in the State to sign a card.

Laura visited schools and businesses as well as religious organizations, VFW Chapters, Lion and Rotary Clubs, talking with Scouts and artists, Hospital Marketing Department Staff and anyone who expressed an interest in sending care and respect to our deployed Troops.

Generous Grants from Eversource, Walmart, BAE, and Hannafords were awarded and donations from small businesses and private citizens were received. WMUR ABC Affiliate, WZID Manchester Radio Group and newspapers around the State covered the story of the Challenge.

The Associated Press (AP) picked up the story and word traveled around the Country, bringing in Cards from Pennsylvania, Washington DC, Maryland, Colorado North Carolina, and Arkansas. Veterans groups including Veterans First Responders Health Care and Strive jumped on-board as did the First Responders around the State of NH.

The cards piled in boxes in Laura’s dining room, totaling close to 50,000 at final count. Cards were boxed up and mailed out to addresses around the World, to the Air Force, Navy, Marines, Coast Guard and the Army, all of whom serve to protect our Country’s freedoms and our safety.

In December of 2018, Laura traveled again to Washington DC and met with Senators Shaheen and Hassan and their Staff to both review the 2018 Challenge and to make plans for 2019. She also was honored by an invitation to the Pentagon by Lt. Col. J.J. Johnson (Air Force) after their extensive collaboration with the Card Challenge. Lt. Col. Johnson joined the Board of Directors of the Nonprofit as V.P. For Military and Veterans Affairs. He is a true partner to the Holiday Card Challenge and a central collaborative source for “everything military”!

Already planning for 2019, Laura started placing phone calls, writing letters, and meeting with potential participants directly after the 2018 Cards were shipped out to the Troops. Cards began to pour in in July and new partnerships have formed. The messages remained as heartfelt and genuine as ever, expressing profound appreciation to our troops. From our youngest card-signer to our cherished seniors, the Holiday Card Challenge for our Military had collected thousands of cards for the next coming season. 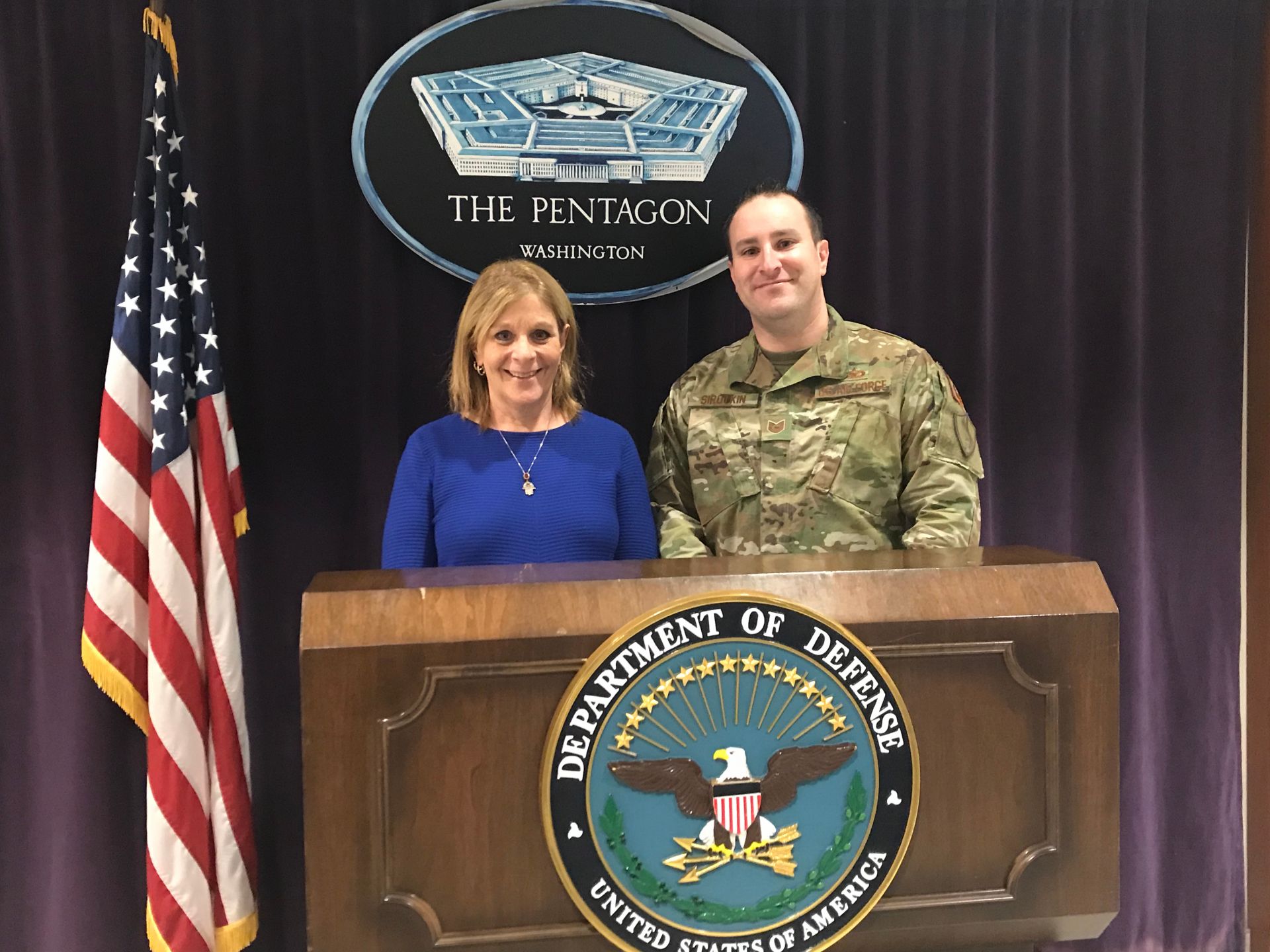 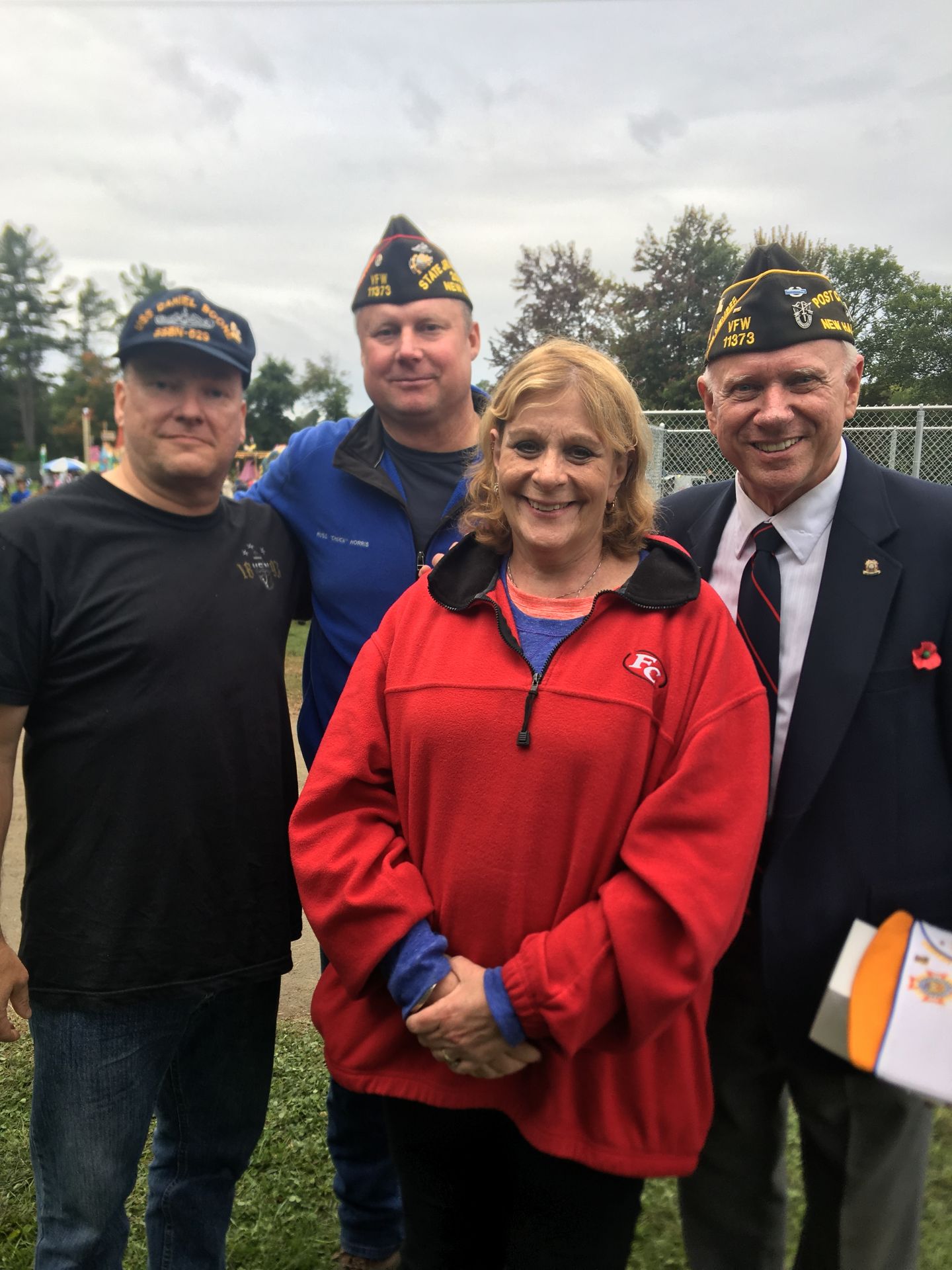 In 2019, the Card Challenge went national!

The 2019 Challenge started right after the holidays with thousands of unsigned cards donated, each one ready to be signed in the upcoming year. “Christmas in July” activities  and a spectacular kickoff event at Eversource in N.H. got things going and soon, cards started flowing in. Senators Shaheen and Hassan, Congressional Representatives Kuster and Pappas, Governor Sununu and Mayors across New Hampshire once again supported the Challenge. Education Commissioner Edelblut contacted State Commissioners across the Country, challenging them to join in!

All the major US television Networks covered the story of the Challenge and the Associated Press included the Challenge in newsprint from Coast to Coast. ( See our Media Corner to view these segments) Additionally, almost every Presidential Candidate signed cards as they visited N.H. during the Primary Season.

The energy and enthusiastic support was phenomenal! Americans in over 45 States joined in to send holiday greetings to our beloved Warriors!

In November, 2019, Dr. Laura marshaled the forces. Friends, family, and neighbors worked together to proofread, count, bundle, box, and deliver over 100,000 holiday cards. More than 40 moving boxes. More than one ton of your love and caring and respect.

This was just the first wave. 75,000 more cards still awaited preparation and delivery!

With gratitude to the Hollis, N.H. Post Office, the cards were sent after hours of work and thousands of dollars in postage. The cards traveled the Globe by air, land, and sea to be delivered to our noble Warriors, all of whom are defending and protecting our freedoms.

In the end, 175,000 holiday cards were sent out in 2019. It is said that, “…it takes a village” and in 2019, that Village was one of a Nationwide outpouring of generous hearts and appreciation for our Troops. 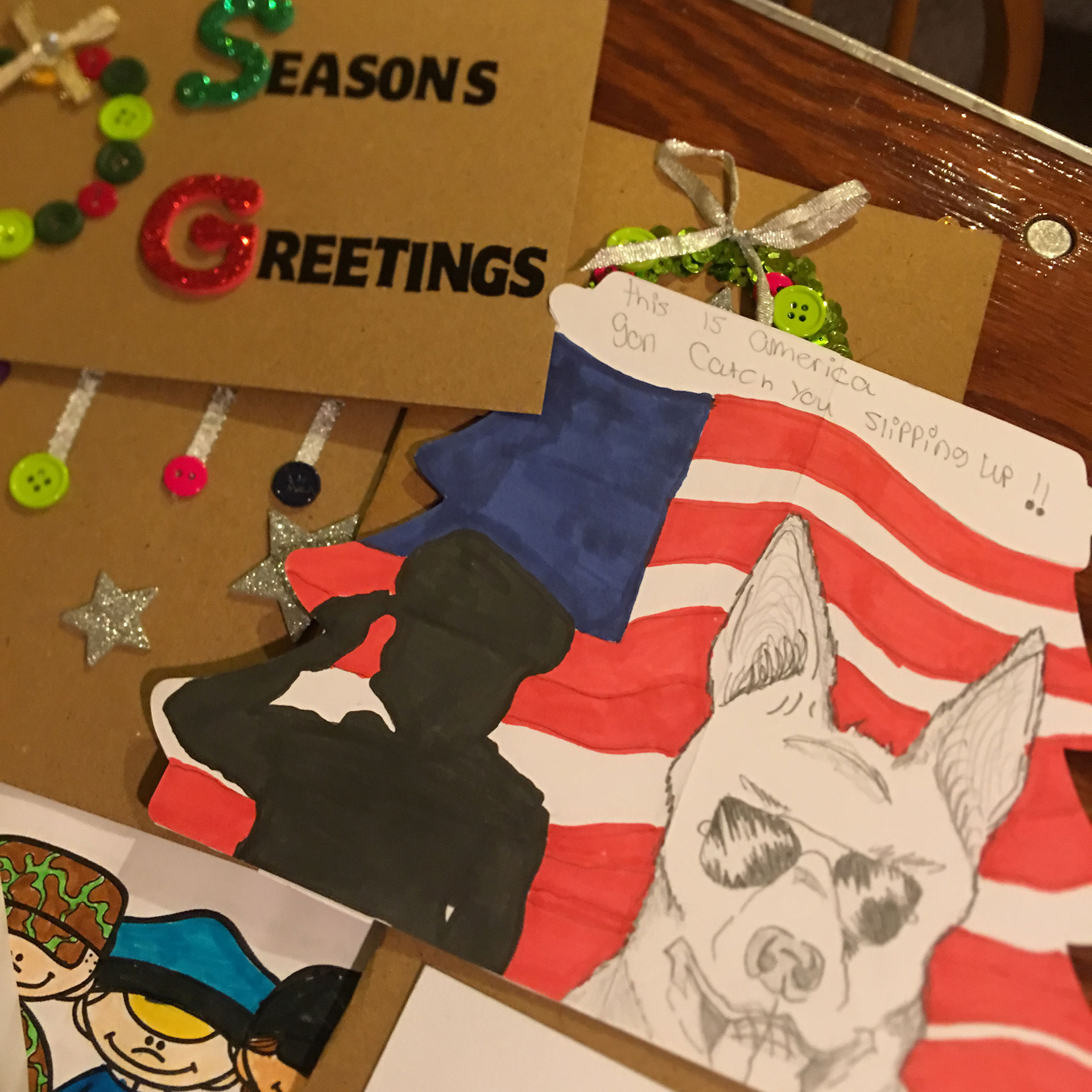 With great honor, Dr Landerman-Garber received four American Flags that were flown over Military Bases as well as a US Embassy in appreciation of the thousands of card signers. It is hoped that those Flags will fly over schools and businesses, sharing the pride of supporting our Troops.

When COVID19 emerged as a global pandemic, plans for 2020 were uprooted and new ones put in place. Nothing will stop the energy and commitment behind the Challenge, the devotion to our deployed Warriors. Volunteers are bundling cards at their homes, touch-free drop boxes are being set up, and cards are available for signing per the asking! Dr. Landerman-Garber and the thousands of cardsigners will carry out their mission no matter what. As of January 2021, 110,000 cards had been signed, bundled, and sent out. Keep those cards coming as every card counts.

While the complexities of our times continue on, the nationwide dedication to support our Troops remains clear and simple: Our Warriors deserve our appreciation and gratitude and the Card Challenges will carry on to complete that mission! After January 6th, thousands of cards were sent to the U.S. National Guard who were stationed in the U.S. Capitol. An equal number of cards-of- care were mailed to U.S. National Guard across the Country who were assisting with the COVID vaccine rollout. Cards of appreciation were sent out to deployed Warriors, Troops in Basic Training, and to Veterans and Service Families to let them know that we were thinking of them! The Holiday Card Challenge has evolved into a year-long #cards2connect and #cards2REconnect commitment to our U.S.Military. It has certainly been a surreal and inspiring journey since the grass roots beginnings in 2003.

This year, the Holiday Card Challenge actually began on 12/26/20 when boxes of signed cards arrived with attached notes saying, “Please tuck these cards away for 2021!” The media coverage continues to spread the word as there is nothing like Kelly Ripa and Ryan Seacrest cheering us on. ABC WMUR New Hampshire Chronicle featured the Challenge on a segment 8/18/21 and the from-the-heart stories shared by three of our U.S. Military Members spoke to the profound impact of receiving your cards while deployed and away from home.

Whether you are a 10 year old student in Northern Wisconsin, an international corporation with an active corporate social responsibility platform, a synagogue congregation in Portland Oregon, a dance studio in Nashville, Tennesse, or a Blue Star Family in Pittsburgh, Pennsylvania, please join in for the first time or as a “repeat customer”! Our collective mission, now more than ever, is to remain connected to one another and to share-the-care with our Warriors who are defending our Country’s freedoms and safety.

As one five year old wrote, “IT IS ALWAYS GOOD TO SAY THANK YOU TO SOMEONE WHO DOES GOOD THINGS FOR AMERICA”. 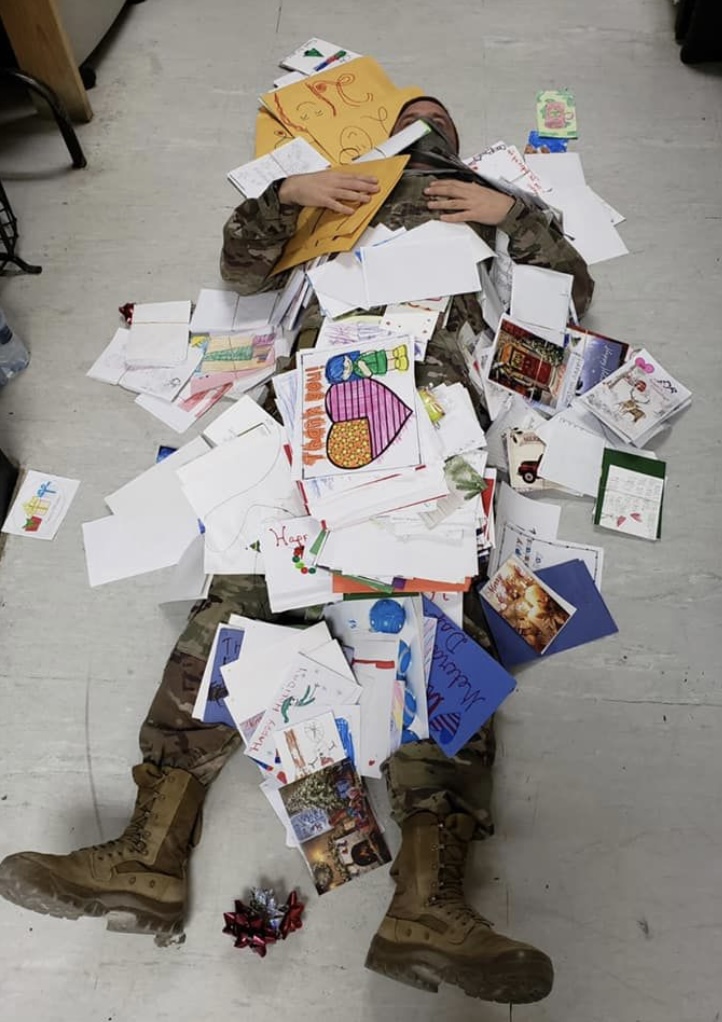 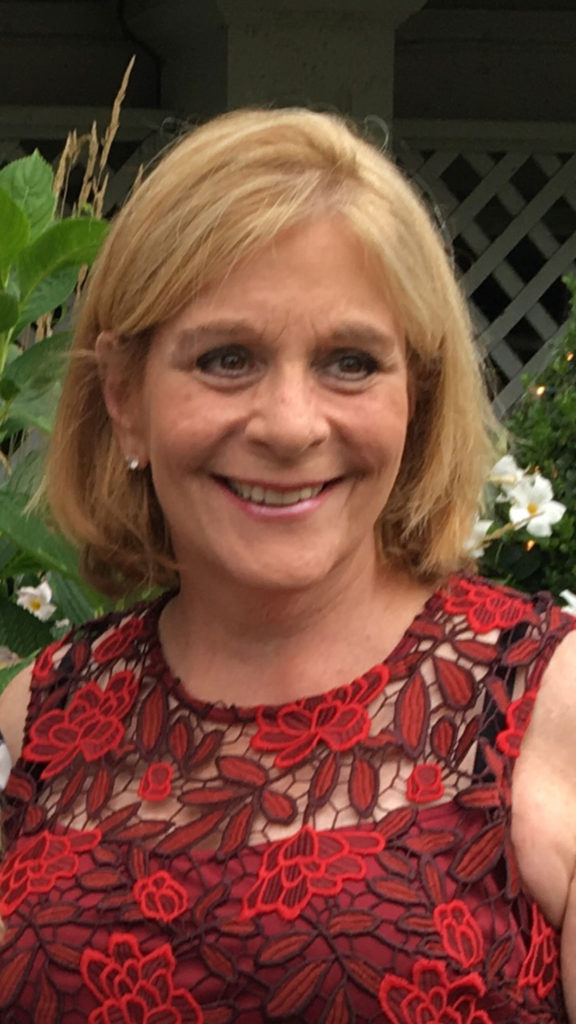 Dr. Laura Landerman-Garber is first and foremost a daughter, wife, mother and grandmother fiercely devoted to supporting and loving her extended family.

Laura’s philosophy of life has long been guided by two of her favorite quotes:

“I keep my ideals because in spite of everything I still believe that people are good at heart.”

“You never really understand a person until you consider things from his point of view… until you climb into his skin and walk around in it.”

Harper Lee (To Kill a Mockingbird)

These messages, along with others by the same two authors provide much of the energy behind my unstoppable optimism, drive, and determination.

My career as a clinical psychologist has also provided a backdrop to my commitment to helping others and raising awareness of the importance of kindness, compassion, connectedness, and not just tolerance but acceptance of others. Community service was a central part of my childhood and I hope that I have -in creating the Military Holiday Card Challenge Or Cards2Connect Challenge – carried that message of giving to the next generation.

I genuinely enjoy the opportunity to assist anyone who wants to create a local Military Holiday Card And/or Cards2Connect Challenge or frankly, who just wants to sign one single card. I believe that “Every Card Counts” rules the day. I’m as grateful for one card signed with genuine caring as I am for 1,000 signed cards.

I’m open to your ideas and suggestions about how to best achieve the Military Holiday Card and Cards2Connect Challenge goals!

The veterans and service families that I have met through the Card Challenge have changed my life. Stories of dedication, loyalty and sacrifice have been inspiring, sometimes prompting laughter and sometimes prompting tears. It is the very thought of our deployed troops receiving a hand written message of holiday cheer and support that drives me to continue the Card Challenge each year.

In 2017, I met a Vietnam Veteran who still carries with him a card that he received from a child when he was in Vietnam 50 years ago. He said that that single message brought him comfort and hope as well as the knowledge that there was someone back home in the States who was thinking of him during his darkest hours.

On 8/18/21, WMUR ABC New Hampshire  Chronicle featured a segment on the Holiday Card Challenge. It certainly was an honor to share the story with the viewers but the most inspiring part was to hear from three of our beloved US Military Members who themselves received cards while away from home during Service. They spoke poignantly about   your cards and the profound impact the messages of care had on them and their Brothers and Sisters in Uniform.

If that one card after all these years continues to have such a profound impact on that soldier and our Troops still talk about the impact that your cards of care and  connection had on them, then the least that I can do is to carry on their mission and invite all to join in. 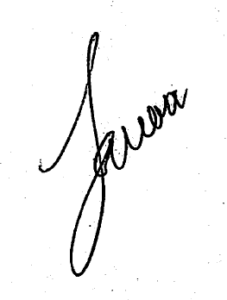 Promoting the Challenge, purchasing, boxing and shipping holiday greetings by the ton around the globe costs money.

Monetary donations in support of these and related costs will be gratefully received.